trbobrk said:
Ah. Mine are always in good condition, but I remove them to fit larger rotors. I never throw them away.because I have a hard time destroying something useful so I got quite the pile over here if you ever need them.
Click to expand...

I'd be interested in a pair for sure if you can send me a PM with what you're looking for shipped to Denmark. After removing the from the "donor car", the state of these are ok for now, but not in the long run:

Yes the EuDM PH. III cheapo specs have a different headliner, look only a little more cheap than the other but will stay in its place forever.

You bought a LX spec but after all the things you are going to dismount, You must advertise it like a L or like a «Jensen Spec» ?
Click to expand...

Well, upon closer inspection the headliner is staying. The LX has a cheaper feeling one as you mention, and although it's in perfect condition, I think I'd prefer to make the current one in the GT instead. It has a more velour/plush feeling to it which I like, so I'd be better off trying to repair that one.

About the spec, then it's definetly going to be less than L spec, so a "Jensen special" sounds fair ?

Current state of affairs below with headligt washers fog lights and front bumper demounted and stored away. I also removed the cover under the glovebox and moved to the GT. Had I done this before I could have sent you even better pictures of how to install it

Joined Dec 5, 2006
·
228 Posts
Not much more as I see it,as the general condition in engine bay etc. isn't the best. The rear seats are indeed foldable, but they've all been that in the ones I've had. And I have SRI/GT interior already, so this one is not interesting, even though it's in pretty good condition and I love and much prefer 80's/90's velour. Surpisingly the GT seats are not velour, and the SRI only have it on the side bolsters and headrests.

Joined Dec 5, 2006
·
228 Posts
Just remembered why I called it a baffle-plate. Because that's what it says on the one new one I have laying around

Joined Dec 5, 2006
·
228 Posts
So the temporary LX Base model was sold and collected yesterday. Sold for what I paid, so nothing lost,only parts gained. Result!!

How to celebrate this? Well how about another P10 to replace it? This time it's a 1996 1.6 SRI model, which once upon a time was someones project. It's still a project and not registered for the road, but that will now be my headache to sort. I'll be collecting it tomorrow 2.5 hours away, and hopefully it will make the drive back home without issues

More details to follow, but for now, here's a picture of the project - aka "The GTR"

Exactly right.... collecting, not hoarding.
And this car just popped up, I wasnt really looking for it. What caught my interest was the Laguna splitter and that it came with multiple spares in the boot. And the color of course - I love that color. Turns out it's the original Skyline color according to the seller - the previous owner had it painted with the correct paint code for it. Maybe, maybe not that's true, but it looks great. Can't wait to give it a wash and polish.
Anyway, it's now collected and safe at home. It developed a misfire/lack of pull after about 10 minutes of driving from the place. Great when you have a 2.5 hour drive home. I cleaned the distributor cap, and it got better though, so I'll change the cap and rotor for new versions soon, which hopefully will sort that.
Other than that it drives "ok" for a car which has been mostly standing unused for 4 years. Hopefully the MOT wont be too bad to pass - there's of course a few things I need to attend, but all in all it's not to bad. Trouble list is as follows:

A few pics from this morning. Slightly frosty

PS. Not a fan of the Laguna splitter at all but maybe that is me. Lagunas were manufactured 40kmts far from home and the workers had great discounts on parts. That situation ended in the 25%of the cars in my town having one...

sweetkoitoh said:
Once you get the car detailed, the skirts in place and find a good set of alloys, has to look superb.

PS. Not a fan of the Laguna splitter at all but maybe that is me. Lagunas were manufactured 40kmts far from home and the workers had great discounts on parts. That situation ended in the 25%of the cars in my town having one...
Click to expand...

Not everyones cup of tea I know, but your point is exactly what makes it attractive to me. It was such a common thing back in the day to use the Laguna splitter, so it's very much in line with late 90's early 00's styling. Besides, you never see them any longer (here in DK anyway), which makes it special in my eyes.

So, this weekend I had planned to investigate it a bit futher, as I basically just bought it, drove it home and parked. But a stomach virus placed me in bed most of the weekend, so it ended up being a rushed peek instead.
The trunk was full of parts, but what was actually included in there? I had no idea besides the front bumper, as seller had loaded them into the trunk prior sale and I didnt check when picking it up. This what I had seen so far:

I was pleasantly surprised though.

Short list as follows:
1 front bumper
1 front grille
2.5 sets of tail lights
2 sets of headlights
1 lip of unknown origin, not sure if its another Laguna one
1 set of "skirts" for the back bumper
And some other stuff, but above are the more interesting ones.

The grille was actually quite interesting. I can only ever remember seeing one Primera in this green color. I do wonder if below car which is back from the 00's is where the glorious(!) GTR emblem and grille came from?

The bumper "skirts" are the ones below and they fit on the back bumper as shown. Not really my thing though.

Oh, and the car has these F&F gauges. Not really my thing either.

A few pics of the grim state of the interior:

And finally the front without the GTR emblem:

Joined Jun 23, 2017
·
245 Posts
Brother the black front lip is the «Euroforma» one. Offered in the original parts brochure. I can send you pics from the brochures in white, red and... black?

Love the skirts for the rear bumper, genuine?
S

They are the rear Euroforma lip cutted by the right place. Will show pics of everything.
S 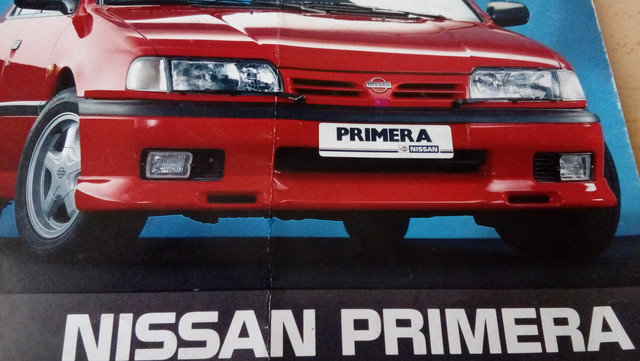 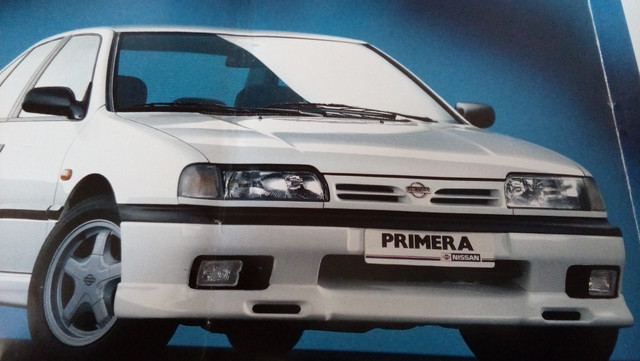 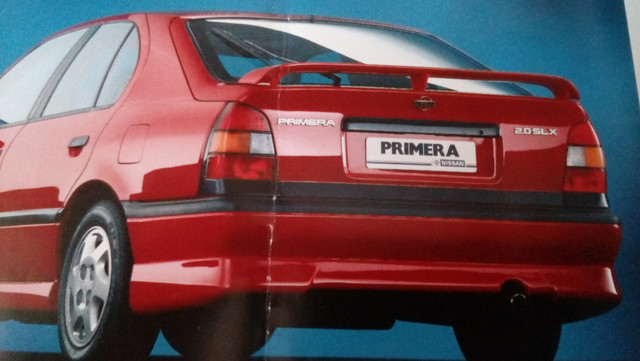 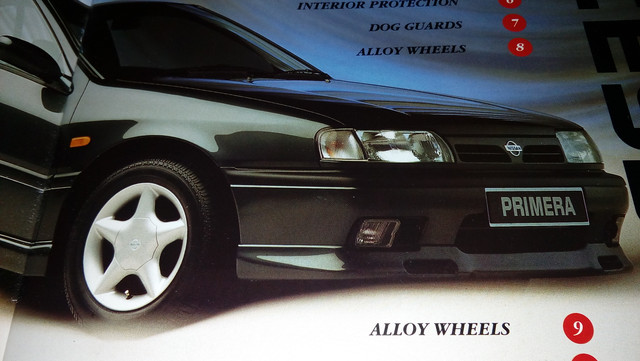 sweetkoitoh said:
Brother the black front lip is the «Euroforma» one. Offered in the original parts brochure. I can send you pics from the brochures in white, red and... black?

Love the skirts for the rear bumper, genuine?
Click to expand...

sweetkoitoh said:
OK OK, after watching the pics I know were these rear skirts came from.

They are the rear Euroforma lip cutted by the right place. Will show pics of everything.
Click to expand...

Thanks man, good memory. Those looks to be the ones. I'll check for a branding on the parts when I get home, but would be nice if they were the original optional ones from Nissan.
I first thought the rear bumper skirts could have been a chopped up MS rear one, but I found your thread on the one you're working on, and doesn't quite match.

Joined Mar 21, 2002
·
21,000 Posts
I can't remember if it is labeled on the bottom or not. I know the corresponding front has foha austria molded into it, but it may have been covered when painted.
41 - 60 of 84 Posts
About this Discussion
83 Replies
19 Participants
Last post:
Dane 1 mo ago
Infiniti G20 Nissan Primera Forum
A forum community dedicated to Infiniti G20 and Nissan Primera owners and enthusiasts. Come join the discussion about performance, modifications, classifieds, troubleshooting, maintenance, and more!
Full Forum Listing
Explore Our Forums
FS: For Sale Items Engine/Transmission Cosmetics Meetings and Events Maintenance
Recommended Communities