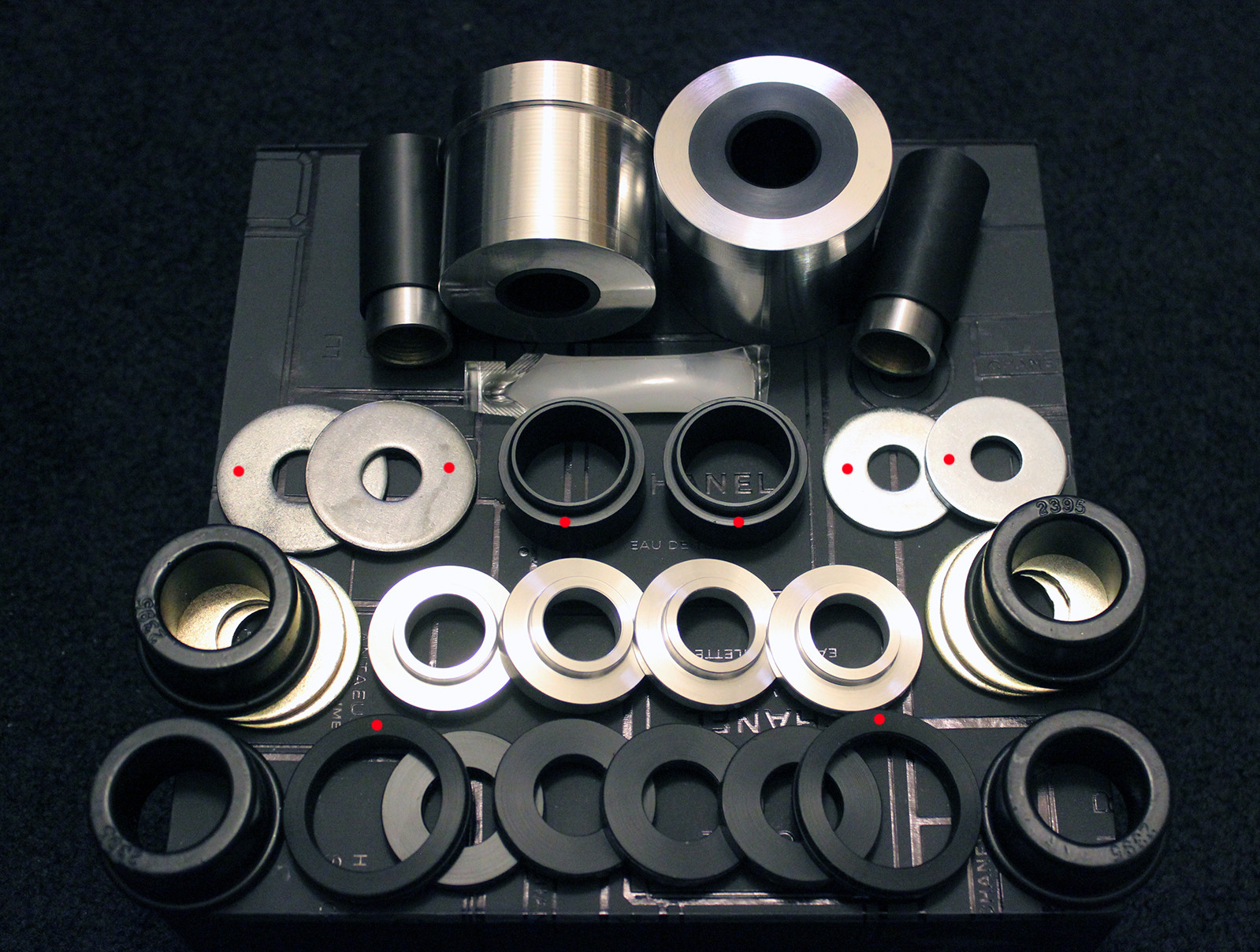 hawaiiaNX said:
If anyone is still on the fence about getting these....DO IT!!!

Let me preface my review by saying that I installed these at the same time that I did my JECS crossmember bushings. Since I was already under there type of deal. Also, I have an auto P11 that has all kinds of front end suspension problems currently. I have prothanes (F+R only), superpro rear LCA bushings with ES fronts, and stock struts and springs in the front. Pretty sure struts are dying/dead, especially the driver's side. Also, all four crossmember bolts had their rubber insulators in them.

And now, the review. Upon the very first drive, even with all that's going on up front on my car, I was actually able to spin my wheels quite smoothly. While there was already much less play in the engine assembly with the prothanes, adding the subframe and crossmember bushings made everything feel much more.....solid. And safe. No engine rocking back and forth. I actually find myself accelerating harder much more often after installing these because the acceleration feels so much more smooth than it was before the inserts. Everything feels so much better/smoother/safer. I don't know if I can explain that any better. It's just something that you would need to feel.

Also, my trans shifted quite hard into gear when cold, usually accompanied with a loud "thunk" noise even after the prothanes. Noise no more. Also, I don't know if there is a way to measure this but I swear my car actually vibrates LESS with these inserts all in.

I have NOT noticed much difference when yanking turns though, as I am not looking to test that out until I get all of my suspension issues sorted out. I can post a more complete review then.

Installation was a snap. Exactly as is described in this thread. Took me maybe 25 minutes to do all of the subframe AND crossmember bushings combined. And that was taking my time.

All in all, I would not hesitate to put these into any other P11 (or SR20-powered vehicle that Charlie makes these for) that I get from here on out. They contributed no noticeable additional vibrations to what was already there. As a matter of fact, I felt like it was more the opposite. Tightened up the front so the prothanes contributed less to the overall vibration of everything. Price was definitely a consideration, but I quickly realized that the benefit of these easily outweighed the cost. I would purchase and install these again in a heartbeat.

On a little side note, having these installed has made me consider building up a P11. Manual LSD trans, coilovers, and a turbo, plus all of these stiffening bits would be AWESOME! Definitely gonna have to wait until I find (and build) my dream NX2000 first though. Everything else will always come second.

Anyways, buy these and enjoy!

COÑO(DET) said:
Thank you sir, great product. This is a must buy
Click to expand...

rx794 said:
I got to install these delrin subframe bushings on my P11. I would like to point out that I live in the NYC Metro area and that my car is driven daily but it is also driven aggressively as well. With the stock subframe bushings the front end felt separated from the car, as if it moved on it's own with too much slack and no direct immediate feedback on what the powertrain, steering and braking were doing. I immediately noticed after I installed the delrin subframe bushings that the steering, handling and braking were all noticeably improved due to the front subframe being directly attached to the unibody. The steering is quicker to respond, better turn in, more accurate at high speeds, less wandering in a high speed straight and it also gives better feedback through turns. The powertrain is able to put down the power more efficiently during take off and in between shifts due to less powertrain slack. Manual P11's will benefit from this even more so. My P11's suspension consists of Eibach springs, KYB AGX shocks, front upper delrin bushings, front upper mounts with more suspension travel, a Carbing FSTB, Carbing front lower arm brace, Carbing RSTB, Addco rear sway bar and 17in SE-R wheels. I installed these suspension mods before I installed the delrin subframe bushings and the car never really handled as good in the front because there was just so much slack from the stock subframe mounts. Now everything feels like it's working in unison, as it should be. I would recommend these bushings to anyone that has a P11, even a stock P11 would feel an improvement in feel with these delrin bushings. Drag racers will like the way they reduce powertrain slack, road racers will like the way the front subframe supports the front suspension in place so it moves with the car. All in all a great product for P11's. Thanks UNISA JECS for such a great product and supporting our community with parts availablity for the G20.
Click to expand...

SarCaZm said:
These were installed last weekend and it was a good upgrade. The power feels planted more, and my braking seems to be smoother. The car feels in unison.
Install is straight forward and I have a few pics in my progress thread. Charlie has good communication and I'm glad I made the purchase.
Click to expand...

blankman3 said:
The difference after installing these was huge. My car is much smoother over bumps and it has less body roll through corners. This was a awesome mod imo
Click to expand...

WeazG20 said:
Installed these at the same time as small forward lca bushing, immediately noticed a better responsive in driving... depleting 90% of wheel hop, better steering responces and brakes even felt more responsive... after I install Charlie's larger reward delrin/aluminum inserts I feel confident my wheel hop will be gone after reading other peoples review of them! I can't wait!
Click to expand...

My Delrin Subframe Inserts improve handling, reduce wheel hop. The entire front suspension of the 99-02 Infiniti G20 is attached to a steel subframe, which in turn is attached to the car with just four rubber bushings. The rubber bushings deflect under load, leading to wheel hop and less predictable handling. My Delrin Subframe Insert kit substantially reduces unwanted subframe movement and wheel hop. You will notice an immediate improvement in car control after installing these bushings. My Subframe Inserts, insert into the OEM bushings and are compressed during installation to remove any play that might be in the connection between the Subframe and Chassis.

In this video below you can see how much play the stock OEM rubber bushings have and how much the subframe deflects, now see video in post #3 with my inserts installed. 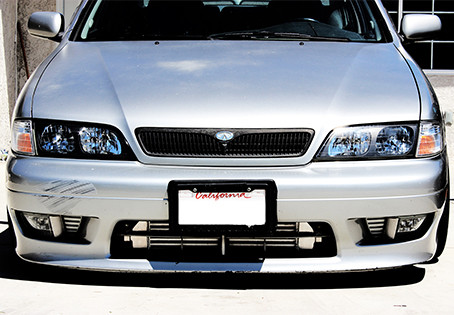 Joined Jan 17, 2005
·
1,703 Posts
In this video below you can see clearly that all play is reduced to just thousandths of an inch and the subframe for all intended purposes doesn't move anymore.


I just installed these this morning and so far my review word is AWESOME!

The car feels connected and solid.

Going over bumps the car moves as a unit feels solid and one piece with no noticeable noise or vibration increase.

Braking and handling feel much much better.

Burnout's and quick shifting into 2nd the tires stay planted to the ground without that gay hopping.

All in all this is just an awesome mod and if you like the feeling of being better connected to the road this mod is for you.
► Show Full Signature

primera4life said:
Im in for a set.
Click to expand...

I'll pm you tommorrow or in teh next day when im ready to sell these, just gimme 2 days.
► Show Full Signature

wheelz said:
how hard is it to install these im viewing from my phone
Click to expand...

It took me 20 minutes

The extension and universal joint will be used to access the front subframe bolt threw the LCA hole, you'll see when you get there.
► Show Full Signature

The figure it out guy...

Joined Jun 10, 2011
·
1,348 Posts
So just to clarify... for installation, you simply remove teh bolt/nut and washerI and place your insert in. And replace washer and nut/ bolt? Im intrested....

WeazG20 said:
So just to clarify... for installation, you simply remove teh bolt/nut and washerI and place your insert in. And replace washer and nut/ bolt? Im intrested....
Click to expand...

Yes and im trying to find washers to include with this kit because the stock OEM ones arent the best for this application.
► Show Full Signature

i still need want your xmember ones, & now these....& then when you settle on a design, i might want some delrin UCA bushings,...non essentric but stock hole centered
► Show Full Signature

[h=2]The longer the explanation, the bigger the lie.[/h]
Click to expand...

i still need want your xmember ones, & now these....& then when you settle on a design, i might want some delrin UCA bushings,...non essentric but stock hole centered
Click to expand...

I'll need to get my hands on a P10, lmk know when your ready for teh x-member bushings and i'll make so some. On the UCA when I find which design I wanna settle on i'll let you know.
► Show Full Signature

could one not make the bushings the same as the Super pros in terms of outter dimensions & lenthgs, then have a steel insert (possibly from the old stock bushing) put in the center?
► Show Full Signature

[h=2]The longer the explanation, the bigger the lie.[/h]
Click to expand...

blankman3 said:
cool product. think you could give me ride in your car sometime? Id like to compare to mine
Click to expand...

Sure you let me know when your gonna be in my area and i'd be glad to.
► Show Full Signature

Joined Dec 27, 2002
·
207 Posts
You may want to do an expanded view of the install order on these so people can visualize it easier. This is something I am VERY interested. Time to sell off some parts!